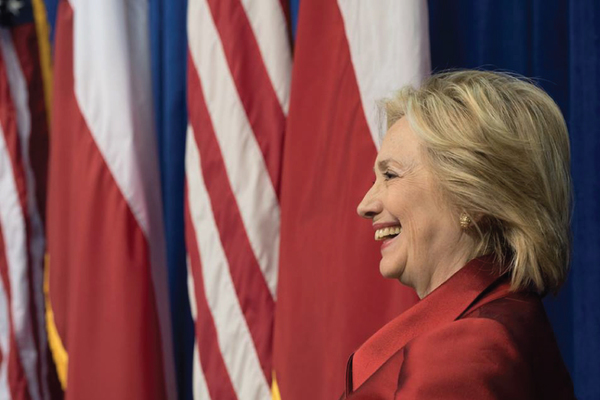 The following excerpt was written by David Martokso and published on the DailyMail.com.

Driving through New Hampshire in the rain without knowing where you're headed is an unnerving experience, but that's where I found myself this morning after Hillary Clinton's staff said I wouldn't be allowed to do my job reporting on her campaign.

At the Clinton camp's request, a group of journalists set up a traveling 'pool' so a single print reporter can be everyone's eyes and ears at events where a room is too small to fit a crush of questions from a larger group.

Plus it saves more than a dozen news organizations the expense of having to be on the campaign trail every time Clinton decides to speak.

On Monday I was the designated 'pooler,' tasked by this informal group of my colleagues with going to two events in New Hampshire.

I landed at the Manchester, N.H. airport well after midnight, thanks to a lengthy flight delay in Washington. A message was waiting for me from one of the reporters who has the thankless task of coordinating the pool with the Clinton campaign.

There was a problem: Hillary's press staff said DailyMail.com wasn't welcome, and they decided it at the last minute.

The pool was asked to send a different reporter. It was too late to substitute someone else in the Live Free or Die state at that point, so I said I'd show up anyway.

Six hours earlier I had received emails from two different Clinton media liaisons – including the former secretary of state's traveling press secretary, Nick Merrill – telling me where to show up and when.

So what happened? That's the nagging question.

Monday morning I showed up at 7:45 in a parking lot where I was to hop on a Clinton campaign van for a drive to the town of Rochester, where the first event would be.

A very junior staffer told me I couldn't climb aboard: I wasn't 'on the list.'

No matter – I'm paid to chase stories, not to take no for an answer. I got back in my rental car and followed them to Rochester.

On the way, I spoke with Merrill for 10 minutes. He gave me a handful of reasons for the sudden rug-pulling.

At first it was because the campaign didn't want some foreign press outlets participating in the pool when others were giving them 'blowback' about being shut out of events when space is limited.

OK, so DailyMail.com is owned by the Daily Mail newspaper from England but the US content is not EDITED by that newspaper, it is edited in New York and currently has nearly 200 employees growing at about 50% a year – and more US online readers than every big city newspaper in America other than the New York Times.

(The traveling press pool welcomes all credentialed outlets, whether they're from the U.S. or Antarctica. The Guardian and AFP, from the UK and France respectively, are already part of it.)

Perhaps they realized that wasn’t going to fly because next they claimed the campaign was trying to follow the example of the White House pool, and by that standard we should have been excluded.

(DailyMail.com is part of what's called the 'supplemental' White House pool. Although our excellent White House correspondent, Francesca Chambers, has the same permanent credentials as her counterparts at The New York Times, the Associated Press and CNN.)

Ultimately, Merrill said they just wanted time to figure things out. Just enough time, I thought, for me to leave New Hampshire.

The bottom line is that for whatever half-baked reason, the Clinton campaign has decided that it wants to control which reporters, from which news organizations, can come along for the ride and report their impressions of what’s going on.

That's not okay. It's the kind of thing that raises questions about transparency and launches let-them-eat-cake metaphors.

Click here to read more from the Daily Mail.

HIllary Clinton has, once again, demonstrated her belief to be above meaningful scrutiny. Clinton’s attempt to control which news outlets have access to her speeches and appearances flies in the face of two basic tenets of American liberty: freedom of the press and freedom of speech.

Unfortunately, Hillary’s attempt to play queen feels all too familiar. The federal government has been consolidating power for years, and they’ve grown more and more bold in their exercise of it. Enough is enough. An Article V Convention of States can strip the federal government of their unconstitutional authority, and thousands of American across the country are catching the vision of a limited federal government.