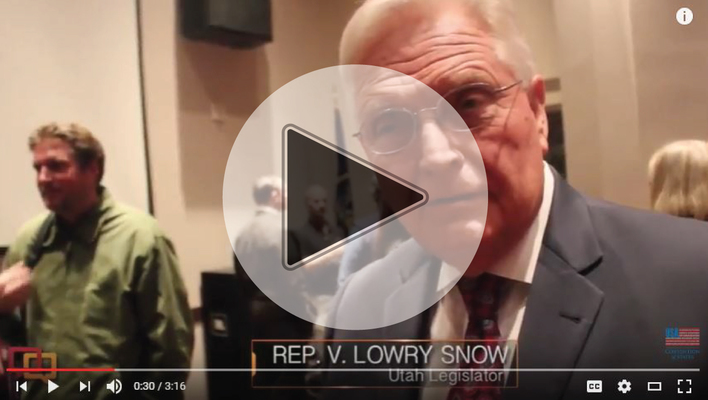 The following article was written by Mori Kessler and originally published in St. George News.

A group of Utah legislators is supporting an effort to call a convention of states with the propose of crafting constitutional amendments limiting federal power. They have also introduced legislation that would add Utah to the list of states calling for that convention.

“It is the solemn duty of the states to protect the liberty of our people – particularly for the generations to come – by proposing amendments to the Constitution of the United States through a convention of the states under Article V for the purpose of restraining these and related abuses of power,” Nelson said as he read a part of the proposed resolution Monday evening via a Skype call to a crowd of about 30 people at the Dixie Center St. George.

Fellow legislators, mainly from Southern Utah, were also at the gathering.

The same resolution was proposed last year under the sponsorship of Rep. Ken Ivory, R-West Jordan, and Sen. Curtis Bramble, R-Provo. While it passed the Utah House, it died in a Senate committee. Despite that, supporters of the resolution believe it will do better this time around.

“We have high expectations this resolution will pass,” Nelson said.

In order to convene an Article V convention for the purpose of amending the county’s founding document, two-thirds of state legislatures must apply to do so. The purpose of the convention sought by the Utah legislators would be to pass amendments curtailing issues of perceived federal overreach and abuse of power.

“I think the Article V provision in the Constitution was intended to allow the people to take back control of the government to some extent when they believe it becomes necessary,” Rep V. Lowry Snow, R-St. George, said, “especially with respect to fiscal restraints, with respect to powers that seem to be out of control.”

Opponents to an Article V convention – including some of the attendees at Monday night’s event – have stated that worries exist of a “runaway convention” in which delegates would potentially amend the Constitution into something alien.

Coleman and others said the convention would be limited in its scope and wouldn’t allow for tangent amendments beyond the convention’s primary goals.

The group pushing for an Article V convention is the Convention of States Project. They have limited the nature of any amendments to be pursued to the areas of spending restraints, limiting federal jurisdiction and imposing term limits of federal offices.

“Nothing outside those three categories can even be discussed,” said Dave Magnesen, the organizer of Monday night’s event.

A simulated convention of states were held in September in Virginia that was attended by legislators from across the county. Utah delegates at the simulated convention included Nelson and Coleman, as well as Rep. Ken Ivory, R-West Jordan. Ivory ended up being elected as the president of the convention.

“We demonstrated this convention will work by the results of the (simulated) convention,” Nelson said. “It will not run away.”

Out of thousands of amendments proposed in the simulation convention, six ultimately passed.

Thus far, eight states have passed resolutions supporting a convention of states, Ivory said. An additional 26 need to pass the same resolution in order to make that happen. It’s possible an Article V convention could be held in the next four to five years, he said.

Once 34 states call for a convention, state delegates would be chosen to attend and ultimately produce proposed amendments. Those amendments would then be sent back the state legislatures for ratification. Thirty-eight states would need to ratify the amendments to make them reality.

In order to help get Utah’s own Article V resolution passed, Nelson and other legislators said voters need to contact their state representatives and senators and ask them to support it.

A constituent’s voice can have a lot of weight, Coleman said. Both she and Rep. Jon Stanard, R-Washington, said it would surprise the public how little they actually hear from constituents concerning proposed bills during the legislative session.

Individuals who support the idea of a convention of states can also visit the Convention of States Action website and sign a petition calling for the convention, as well as learn more about the project in general and how to move it forward.

The petition is nearly two million signatures, Ivory said, with 7,000 of those signatures coming from Utah. Ivory said now is the time to make this happen.

“Many people think now that there is a certain president in Washington, there may be policy change,” he said. “Policies may change, but they’re temporary. Policies change all the time, and we need to move for permanent structure change to secure those divisions of power that protect our liberty and our right to decide at the most local level – now is the time.”