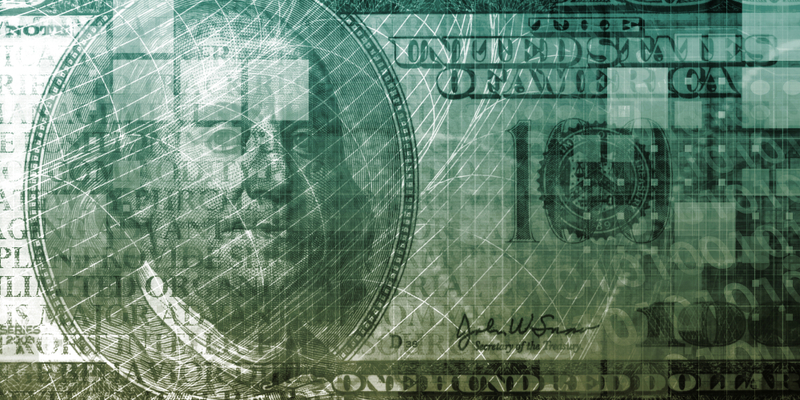 Those of us in the Convention of States (COS) movement know well the three pillars of the effort to invoke Article V of the U.S. Constitution. Of the three pillars, I believe our primary focus must be enforcing “fiscal restraint” on our federal government. Successfully choking off the cash cow that is taxing an ever-dwindling percentage of the United States citizenry and ending the government’s ability to print money is the key to the other two pillars. The federal government is actually digitizing money now as there is no physical way to print the number of dollars added to our debt in the past 3-4 years. We can debate the merits of my logic, but without money, it is difficult for the government to do anything.

Constitutionally mandating, through amendment, a balanced Federal budget just like every state government must do already is tantamount to restoring the United States to its rightful place as the nation that changed the world. We must force our government to live by the ideals that made us great; frugality, charity, and integrity to name a few. If Congress is forced to actually write and balance a budget, something they haven’t done since 2010 and 1957 respectively, the bureaucracy would have to shrink. Yes, 1957 was the last year our government did not add to the national debt by spending more money than the previous year, a.k.a. balance the budget. And Congress hasn’t passed all 12 appropriations bills (budget) but has been doing “continuing resolutions” or omnibus bills instead of writing a budget since 2010, or some “experts” say since 2006.

Regardless, forcing fiscal responsibility means less money to waste thus fewer unelected bureaucrats can be hired. Hopefully, this would lead to a drastic reduction in the size and scope of the Executive branch (1 of the 3 pillars of COS). This could well force Congress to take back the power they ceded to the Executive branch many decades ago. All corporations and households must downsize when money is tight. Why should the Federal government be any different?

The 3rd pillar, term limits, is more difficult to connect to the relevance of the fiscal constraint argument I am presenting. We have elections, and our founders expected the people to do the term limiting. Sadly, the money and corruption found in both parties have made it very difficult to vote incumbents out of office. The number varies, but roughly 92% of incumbents win reelection. Whether this is due to power, money, corruption, or an uneducated electorate is up for debate. Given the conversations we see/read in the public forums, I’d venture it is a near 50/50 split. No public servant needs a lifetime in government. Ask any Democrat if they want Ted Cruz, Jim Jordan, Rand Paul, or Thomas Massie to be in office in perpetuity. Then ask a Republican if they want Chuck Schumer, Eric Swalwell, Alexandria Ocasio-Cortez, or Sherrod Brown to do the same. What will those answers be? Obviously, a resounding “no” which is a rare moment of agreement in today’s excessively divided environment. On this pillar, We the People have failed our Founders’ vision. All of us. Now we must have an amendment to fix our shortcomings. FDR showed our parents/grandparents the need for term limits for President with the 22nd amendment, ratified in 1951. Why should Congress, SCOTUS, or the unelected bureaucrats’ terms in office be any different? This pillar is an easy one for all Americans to get behind, or one would think, anyway.

Shouldn’t demanding our federal government maintain fiscal constraint have similar bilateral support? It should, at least to anyone who is intellectually honest. It is those in the power positions in both parties who are fighting this. Ask your neighbor what they think of mandating a balanced budget. I’m willing to bet they are in favor of it, regardless of their party affiliation. But for the controllers of the purse strings are not so much in favor of limiting their ability to spend. How else does one stay in power but to promise things to their constituents in exchange for reelection? Regardless of what giveaways are being offered by either party, the bottom line is those “freebies” Are. Not. Free. Are they? Of course not. There is a connection between fiscal restraint and term limits. End the unlimited money supply when your “side” is in power, while simultaneously limiting how many years one can be in power results in a win for our nation…for all of us. This is just another example of how this pillar should unite us all, not divide us.

Let us look at some disturbing data that brings the fiscal constraint argument into focus. 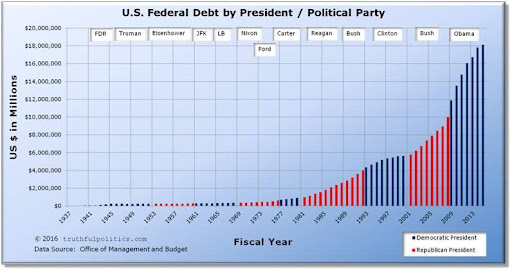 And not to let President Donald J. Trump off the hook, his administration added another $6.807 TRILLION to the national debt (https://www.self.inc/info/us-debt-by-president/). President Biden’s administration has added at least $2 TRILLION more, with the next budget looking to be ANOTHER $2 TRILLION depending on how much more of his Build Back Better agenda passes. Look at this chart closely. What do you see? I see a rising debt, exponential since the first truly “progressive” REPUBLICAN president was in office, George W. Bush. Regardless of which party was in charge, the U.S. debt has risen a lot. Only 53% of U.S. citizens are saddled with this debt in the form of federal income tax. Can both parties agree we need to amend the Constitution to stop this intentional destruction of the United States? I pray to God we can.

Many of us know the real national debt is closer to at least $95 TRILLION. The Freedom of Information Act request for the Fed’s 2008-2010 “banks are too big to fail” stimulus spending reported to be $800 billion was revealed to be closer to $29 TRILLION. The Fed has printed (digitized) likely another $30 TRILLION to support the banks and Wall Street since covid-19 started. These are big claims, but if you take the time to do a modicum of research on your own, you will find these figures.

I’d like to share a graph from my recently published book, Taxation with Representation: A New Evil. The History of Dividing Our Nation through Class Warfare under the Guise of Fairness. This gives you a glimpse at federal revenues collected versus dollars spent.

This graph shows the disparity between revenues and spending. Due to the Federal government’s “creative accounting” and mixing in social security revenues with overall income tax revenues, it appears there was a surplus in 2000-2001 and before. This is patently untrue as I prove in Chapter 13 of my book. As of 2019, the tax revenue and spending data (the budget) show a widening gap before covid-19 spending. President Trump did many great things but balancing a budget…not so much.

The bottom line is this: if you believe the Federal government should only spend the money it has and should not be allowed to create more debt that We the People must pay back through taxes, then doing anything but avidly supporting the Convention of States Article V movement to amend our Constitution is suicide for you and your posterity. Balance the budget, mandate term limits, and government overreach will be appropriately restrained. Our founders knew this and gave us the road map in the U.S. Constitution. It really is this simple.

If you would like to learn more about Taxation with Representation: A New Evil, you can order your copy at Amazon and Barnes & Noble’s online. Your local bookstore can order a copy for you as well. The Kindle version is also available.

Residing in Cincinnati, Ohio James C. Lewis is an ardent Convention of States supporter who authored Taxation with Representation: A New Evil as the culmination of a personal focus on tax policy, history, and politics. A former biology teacher, Lewis has practiced physical therapy since 1996 focusing on spine and shoulder rehabilitation.