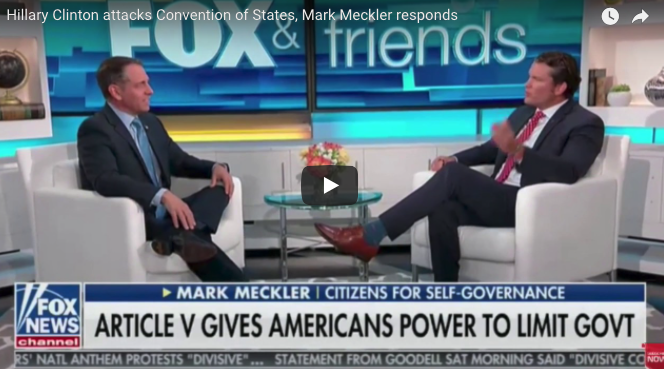 You know you’ve become nationally significant when you make it onto the Clinton’s Enemy list.  (Don’t worry, there are a number of very good people on that list.) Recently, the Convention of States Project — which I helped create — was the target of Hillary Clinton’s ire… and honestly, it cracked me up to see her finally registering that we’re a threat.

Here’s a piece I wrote recently for The Hill about Hillary’s weak attack.

While promoting her new book, “What Happened,” on a podcast, Hillary Clinton took aim at the efforts of the Convention of States Project.

During the interview, Clinton alleges that through gerrymandering, Republicans plan to elect Republican governors, and call a constitutional convention. Clinton suggests that supporters of the Convention of State Project advocates for limits on the First Amendment, no limits on the Second Amendment, as well as limits on criminal justice.

Please enjoy the rest of this article over on The Hill.  And watch for more vitriol to come out of the Democratic “leadership’s” mouths about us.

I, for one, am enjoying this.