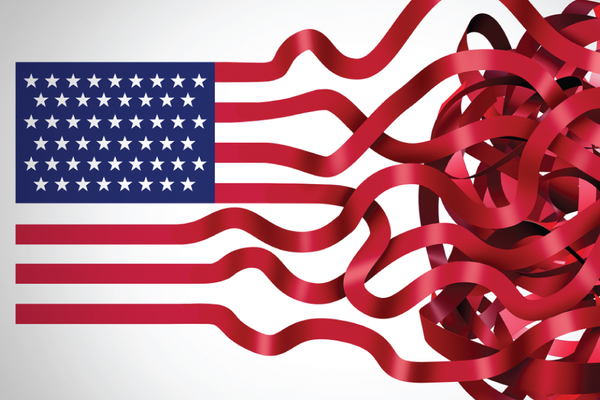 With the political season in high gear, it is clear Americans are concerned about the top issues like terrorism and the economy.

And with the focus now squarely on the presidential race, it’s important to remember there’s another issue that demands the attention of all Americans – a burgeoning bureaucracy that is totally out-of-control.

he Constitution only allows for three branches of government – not a fourth branch.

Yet we have one.

This branch of government is elected by no one, ignored by the media, protected by the courts and by a complex web of laws and regulations: with job security so great that some federal employees are more likely to die on the job than be fired.

This new branch of government is the federal bureaucracy; it possesses a staggering amount of power, and it is not only increasingly partisan, it is increasingly corrupt and incompetent. [...]

The administration’s out-of-control bureaucracy continues to discriminate against conservatives and Christians, passes job-killing regulations that hurt our economy, and seethes with corruption.

We’ve well documented the abuse and corruption inside the Internal Revenue Service (IRS) which unlawfully targeted conservative and Tea Party groups because of their political beliefs. [...]

This bureaucratic nightmare is not limited to the IRS. There are numerous federal agencies that are engaging in an unchecked power play:

· A Department of Health and Human Services abortion-pill mandate forcing employers to violate their religious beliefs.

· Climate-change regulations from the Environmental Protection Agency killing jobs and stifling the economy.

As our nation’s unaccountable and unelected bureaucrats’ power continues to grow exponentially, the ability of the government to control itself and those in power continues to deteriorate. If we don’t do something about it before it’s too late, we risk a dangerous transformation -- from a nation of laws into a nation of men and women corrupted by power and incapable of justice.

There is only one solution to the growing leviathan in Washington, D.C.: an Article V Convention of States. A Convention of States can propose constitutional amendments that not only shrink the power of jurisdiction of federal agencies but eliminate them altogether. Congress makes laws, not unelected bureaucrats. It's time we remind them of their place.