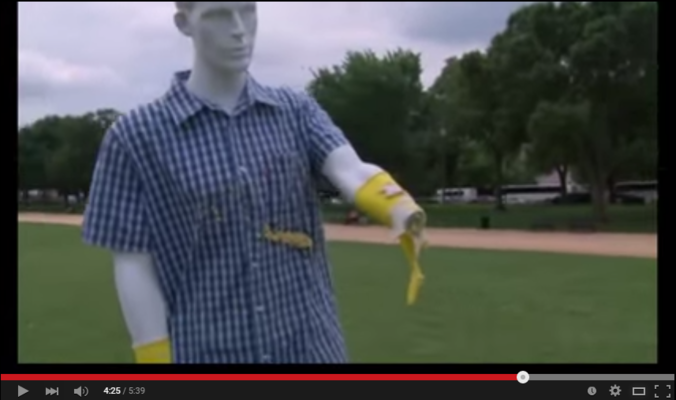 The Consumer Product Safety Commission (CPSC) spent almost $20,000 on a video of dummies being blown to bits by fireworks and set on fire by sparklers.

The CPSC, which considers sparklers a menace, held its yearly demonstration on the National Mall last week to raise awareness of the dangers of mostly illegal fireworks.

The demonstration shows a bottle rocket attached to a wire so it flies directly into a mannequin’s eye, a quick match fuse blowing up a watermelon, and a mannequin standing directly over a firework that subsequently blows its head off. The CPSC used an infrared camera to show that temperatures of a sparkler and a blowtorch are similar.

A child mannequin’s dress also catches on fire when her mannequin friend holds a sparkler on it repeatedly.

The federal agency issued a contract to “produce, edit, and distribute video on fireworks safety” on June 16, costing taxpayers $19,044.

A spokesperson for the CPSC confirmed that that contract was for a video news release of the demonstration, which was provided by satellite to television stations across the country.

The CPSC gave the Today Show an exclusive of the event, where a correspondent talked of the “hidden danger” of sparkers. “The CPSC says your children should not be playing with sparklers at all, and if they do there needs to be adult supervision,” the reporter said.