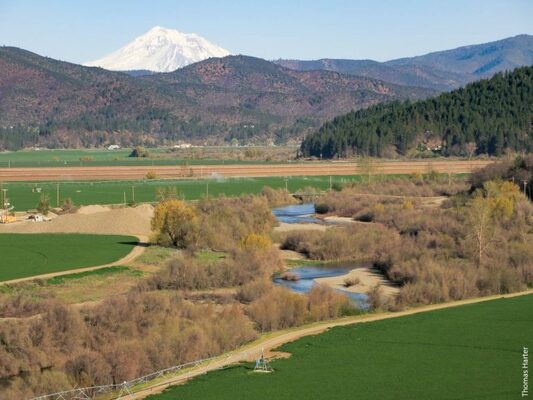 In a nutshell, a federal government prohibition on water distribution to Northern California farmers presents an urgent action item for all members of the California State Assembly and Senate.

Because the people of California no longer have a voice in the management of the California water supply, a literal act of Congress is required for water to flow where it is needed most: the California farms that could produce abundant, ready-to-eat, nutritious food to California and the nation.

This quote from Rep. La Malfa's newsletter paints the picture:

Only last week, the Bureau of Reclamation announced that they would only be delivering 50,000 acre-feet of water to roughly 1,200 farmers from the Upper Klamath, a small fraction of what they're legally entitled to. This year's allocation is less than 15% of what the Klamath Project would receive during a typical irrigation season, and the second-lowest irrigation supply ever. The farmers own the stored water in Upper Klamath Lake, not the federal government. Over 340,000 acre-feet is stored there for the farmers’ use. Yet, the federal government is violating the Reclamation Act and taking the vast majority of the farmers' water for the federal government's Endangered Species Act and tribal obligations.

That's right folks. This is another example of federal government overreach that continues to negatively impact farmers in Northern California, reducing the food supply to every person in the state. Over 50% of CA's economy comes from agriculture.

Limiting the water to farmers won't devastate only the farmers, their families, employees and communities. This is going to guarantee those farmers aren't able to plant or harvest a crop this year, affecting all of us.

Farmers in the Klamath Basin can produce nearly half a million bushels of wheat a year, but only when they have water. I, along with Oregon Congressman Cliff Bentz, urged President Biden to release more water for the farmers in the Basin. Our national food security depends on it.

We agree. Our nation's founders never intended the people's ability to produce food in California would be controlled or hindered by politicians or lobbyists in Washington, D.C. The California State Legislature should manage California resources because these legislators answer directly to the people in their communities.

With an Article V Convention of States, State Legislators can bypass Congress and return power to the states. Amendments to rein in the scope, power and jurisdiction of the federal government can correct the overreach that binds progress and prosperity in the states. A term limits amendment can bring to a halt the hyper-government corruption that goes along with career politicians.

California State Legislators should heroically unite to use Article V to get the federal government out of CA's water management.

To maximize human flourishing and conserve natural resources, the people who live, study and work nearby should advise local legislators on decisions affecting every day life. Local stakeholders will act, learn and adjust to meet needs efficiently, prevent shortages and fortify against crises.

What can the people do? Write a hand-written letter to the district office of  their State Assembly Member and State Senator. Inform them of your support for the Convention of States to return local resource management back to the people. Then, share this article and ask your friends and family to sign the petition.

Want to do even more? Sign up to be a leader.  Complete the application for whatever role suits your time, talents and interests.

The image above shows Scott Valley in Northern California. Farmers in the region are facing reduced availability of water resources they own. Federal as well as state regulations are interfering with the irrigation of farmland that supplies the nation with healthful food.