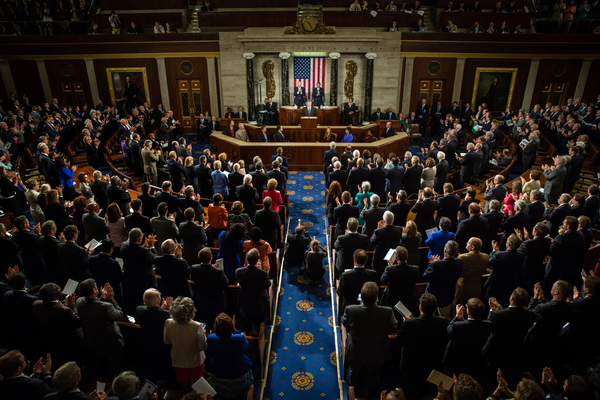 Recent comments by presidential candidate Marco Rubio and Texas Governor Greg Abbott have brought increased national attention to the matter of checking the power and jurisdiction of the federal government. Both men are calling for a Convention of States (COS), authorized in Article V of the United States Constitution, to propose amendments to the Constitution that would limit various aspects of the federal government’s power and authority. The statements of Senator Rubio and Governor Abbott reflect the beliefs of thousands of American citizens, regardless of political party affiliation, who yearn for big changes in how the federal government operates. Many consider the matter to be a constitutional and federalism issue, not a political issue.

In line with what the senator and governor state, there are over 300,000 Americans currently participating in a nation-wide endeavor called the COS Project. The COS Project is an effort to have at least 34 state legislatures (required by the Constitution) pass resolutions calling for a COS. The purpose of the COS is to propose amendments to 1) limit the power and overreach of the federal government; 2) impose term limits on federal officials; and 3) impose fiscal restraints on the federal government. Once the required number of state COS resolutions are received by the US Congress, the Congress is required by the Constitution to call a COS. Thereafter, the Congress plays no further part in the COS, including its operations and outcomes. Amendments proposed at the COS will require ratification by the legislatures of at least 38 states in order to become part of the Constitution and law of the land.

Examples of amendments that might be proposed at a COS include the following: 1) an amendment requiring the federal government to finally operate on a bona fide balanced budget and cease borrowing huge sums of money; and 2) an amendment limiting the total years of service to 12-15 years that a member of Congress or the federal judiciary can serve; and 3) an amendment allowing a super majority of state legislatures to override a financially or otherwise onerous federal regulation, policy, or court decision.

As with most major undertakings, there are pros and cons. This article would be remiss to not mention the major reasons why some people and groups oppose a COS. After much examination and study, this writer concludes that the reasons for opposition are based either on 1) a love of the status quo; 2) fear of the unknown; 3) misinformation; 4) ignorance; and/or 5) influence from foreign interests. These interests are people who want to see the unique American republic form of government dissolve into a socialist state (or worse) with an elite ruling class of special interest groups and long term, self-serving “professional” politicians.

The most common objections to a COS along with rebuttals are as follows:

1) Some people opposing a COS falsely characterize it as a “constitutional convention” as if the purpose is to rewrite the Constitution. As explained above, this is not the case. A COS will propose amendments to the existing Constitution — the only difference is that amendments will be proposed by delegates from at least 34 state legislatures rather than proposed in the usual way by members of the US Congress.

2) COS opponents often voice the threat of a “runaway convention” where rogue amendments will be proposed and approved by a majority of convention delegates and then eventually ratified by 38 state legislatures. There are several reasons why this will not happen, but perhaps the most convincing reason is the fact that as stated above, ratification requires affirmative votes by at least 38 state legislatures. Each state legislature (except for Nebraska with only one legislative chamber) has a House of Representatives and a Senate meaning that a total of 76 individual legislative chambers (75 if Nebraska is included) must approve an amendment before it becomes part of the Constitution. It is very difficult indeed to believe that a rogue amendment (such as revising the text of existing amendments, eliminating the Supreme Court, or requiring property ownership in order to vote, etc.) would receive passing votes in both Democrat and Republican controlled legislative chambers in all 76 legislative bodies! Not going to happen.

3) COS opponents fail to realize or admit that there are additional reasons and safeguards that prevent rogue amendments from being proposed and considered by delegates to a COS: a) any amendment outside the stated purpose for a COS is subject to adverse legal challenge by members of the US Congress which could involve years of litigation; and b) delegates to a COS can forfeit their delegate positions and be subjected to fines and/or criminal penalties if they propose or vote for any amendment outside the stated purpose of the COS. Two cases in point are the Indiana and Florida state legislatures which passed bills stipulating in effect that a delegate proposing or voting for a rogue amendment at a COS is guilty of a “class D felony” (Indiana) or a “felony of the third degree” (Florida).

4) COS opponents often say that there are no rules or procedures established for a COS, so how do Americans know what will happen? The fact is that a group called the Article V Caucus that has been regularly communicating to establish rules and procedures for a forthcoming COS as described herein. Thus far, over 225 lawmakers have joined the Caucus, and draft rules/procedures for a COS have been produced. These draft rules/procedures are available for public review.

As of January 2016, four state legislatures (Georgia, Florida, Alaska, and Alabama) have passed resolutions calling for a COS per the coordinated efforts of COS Project leaders, volunteers, and various state legislators in the four states. By the end of January 2016, a total of 38 state legislatures will have commenced their annual legislative sessions. Because resolutions calling for a COS are needed from at least 30 additional state legislatures in order for a COS to take place, it is imperative that all Americans desiring to limit the power and jurisdiction of the federal government actively support COS Project efforts in their respective states. Further information about the COS Project, including up-to-date news and an on-line petition to sign, is at www.conventionofstates.com. Military veterans can send an e-mail message to vets4cos@comcast.net as well as read and act on the information at the above web site.

In closing, now is the time for many more Americans to actively support the COS Project. Now is the time to become part of this concerted effort to protect and defend the Constitution by limiting the power and overreach of the federal government, imposing term limits on federal officials, and imposing fiscal restraints on the federal government. May God continue to bless these United States of America!