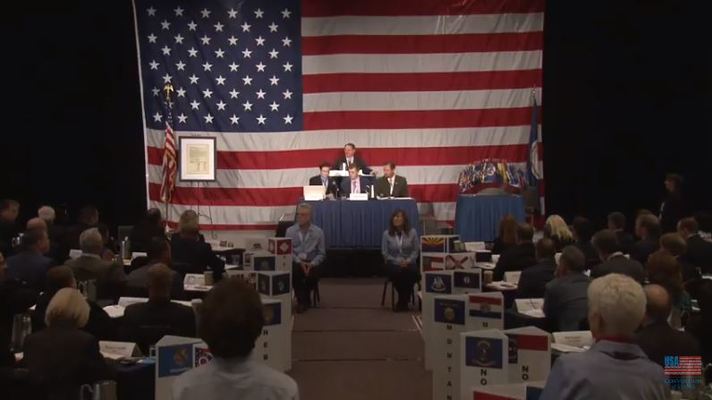 Today began as all conferences do – with hot coffee, warm conversation, and an assortment of breakfast pastries. But what happened next here in Williamsburg, Virginia, made the Simulated Convention of States a “conference” like none other.

The one hundred and thirty four commissioners from all fifty states left their breakfast tables and began the hard work of trying to save America. It began by electing a Convention President. Several great candidates were up for the task, and one by one representatives from each state stood to cast their vote. When the votes were tallied, no consensus had been reached.  A murmur spread throughout the room.  Unexpected! Those who’d received fewer votes graciously stepped aside, and the commissioners voted again. And again.

Seeing the commissioners’ eagerness to serve, followed immediately by their willingness to step aside was inspirational. The committee meetings that followed were less “inspirational” and more “hard work.” Commissioners broke into three committees:

Each committee began by electing a committee chair, followed by a time of discussion.  After a quick lunch — though some worked right through lunch — the commissioners voted on the amendment proposals.

I began my time in the fiscal restraint committee, then eavesdropped on a more casual subcommittee meeting discussing legislative jurisdiction. It was such an honor to listen in on these principled conversations, the back and forth amongst the people from all over the nation. No matter which committee I dropped in on, everyone's proposals limited the power and jurisdiction of the federal government, imposed fiscal restraints, and placed term limits on federal officials.

What I heard – even underlying the most vehement disagreements – was hope.

“One thing I learned,” a commissioner from a southern state told me, “is that this is a sober undertaking.”

While the commissioners were deliberating, I slipped away to give the readers of National Review a behind-the-scenes peek at this historic moment.

(You know it’s a good day if I get to hang out with Sen. Tom Coburn.)

After hours of deliberations, the commissioners emerged from their committee rooms looking tired but energized. Then, because this is Colonial Williamsburg, they were escorted to dinner by fife and drum.

As the commissioners finished up dinner and prepared to turn in for the evening, they chatted before parting ways.  Many of their conversations were looking back. (Alexander Hamilton meant this when he said…  I think people misunderstand Jefferson’s statement on…)

But just as importantly, people were looking forward. Not just to another breakfast line when people can greet each other around the coffee pots for another day of another convention. Not even forward to tomorrow’s debate over the proposed amendments.

What makes this “conference” different than any other is that our commissioners — our patriots — are looking forward to a better day in America when the citizens have the power that DC has tried to take from us. But they’re doing more than looking forward to that day. By their hard work, they’re actually doing something to make that day come sooner.

I’m honored to be a witness to this historic event.