"We are living amidst a generation of Americans who do not truly know liberty," said Corey Rogan, Texas Youth Coalition Coordinator. He is passionate about educating fellow students about both American constitutional principles and the Convention of States movement. His leaderhip role will provide many opportunities to pursue that end.

One of Corey's earliest political memories—what he calls a "rude awakening"—was his family's response to the 2008 election. He was eleven years old at the time and knew nothing about America's history, politics or current events.

But he didn't remain in ignorance for long. His dad pointed him to Mark Levin's book Liberty and Tyranny, and that began a process of self-education on the founding principles of the Unitied States.

"I realized quickly that what I had learned in school about America barely scratched the surface of what this nation was all about," he said, adding that, "there was a stark contrast between the free America that I wanted to live in and the dying America that I did live in."

Legal analysis comes naturally to Corey. Even before he was aware of a movement related to Article V, he was drafting his own constitutional amendments to restrain the overreach of the federal government. Levin's 2013 book, The Liberty Amendments, only added fuel to the fire.

"I readily snatched up a copy and began dissecting his amendments one by one," Corey remembered.

It was from Levin's radio show that Corey eventually learned of the Convention of States movement, and he was eagerly welcomed by the Texas leadership team that was anxious to engage young people in the fight for the Constitution.

Corey is now a student at Southern Methodist University, studying public policy and hoping to pursue a career in politics and law. He is also a member of the Young Americans for Freedom and the campus College Republicans chapter, where he actively promotes the COS cause.

Although people his age tend to lean left politically, he is not troubled by being part of a political minority. Even as a younger teenager, he had embraced his role as "a patriot—someone who writes a blank check to the cause of liberty—even if I was alone espousing my beliefs." 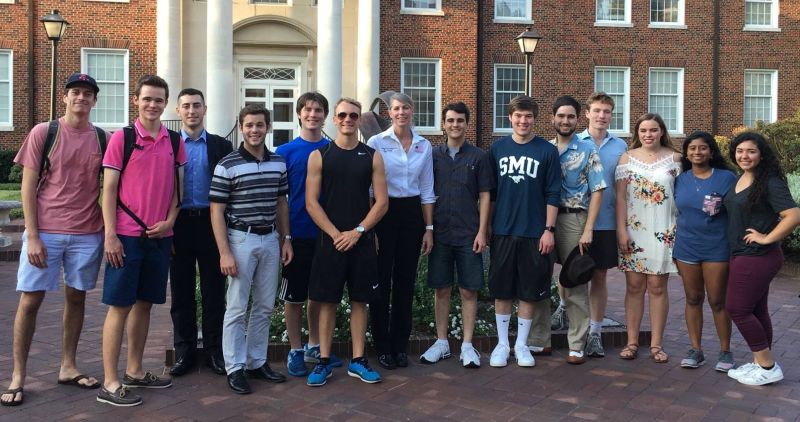 The SMU chapter of Young Americans for Freedom. Corey arranged a Convention of States presentation at one of their meetings.

Corey emphasized the importance of sharing his views with his fellow students.

"If I don’t absolutely commit myself to educating my peers about the Constitution, who else will?" he said. "Schools won’t do it, and parents often don’t know any better themselves."

Corey recognizes a unique challenge in this generation, in that young people are not just ignorant about American principles but actually biased against them. Consequently many of them are anti-patriotic.

"My life purpose is to change that," said Corey. "I choose to be a patriot, even if I am alone. It will be worth it, as time will tell."

Corey sees the Convention of States movement as a perfect fit for this purpose.

"I consider it a blessing that I get to be a leader in an organization that aligns so well with my life mission of reviving the United States of America," he said. "I don’t think there is any other political organization in our country today that can even hold a candle to what Convention of States is doing for our freedom."