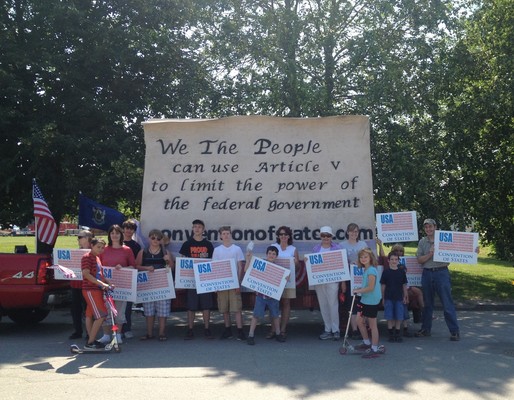 Convention of States volunteers were showing their moxie at the annual Moxie Day Parade in Lisbon, Maine! Supporter Isaiah Lary and the entire Lary family worked very hard to design this awesome float for the event to spread the word about the best way to return power to the states and the people: a Convention of States.

Float designer Isaiah Lary with three of his children getting ready for the big parade to begin.

Convention of States supporters Rene and Bernice Fraser made the frame for the float and also provided the truck and trailer to pull it through the streets of Lisbon Falls, joined by other enthusiastic supporters.

During the day volunteers were handing out information about the Convention of States and asking people to sign the petition at our table. Volunteers pictured here are Nancy Ford, Charlotte Collins, Margery Ripley, and Shelly Quinn. A special thanks to Scott Feldman and Jon Kirsch for providing the sound equipment to play awesome patriotic music by Convention of States endorser Madison Rising.

The Moxie Festival is inspired by the famous Moxie Store that sells the very unique tasting soft drink which was first marketed as a patent medicine in 1876.

Ken Quinn is the State Director for the Convention of States team in Maine.