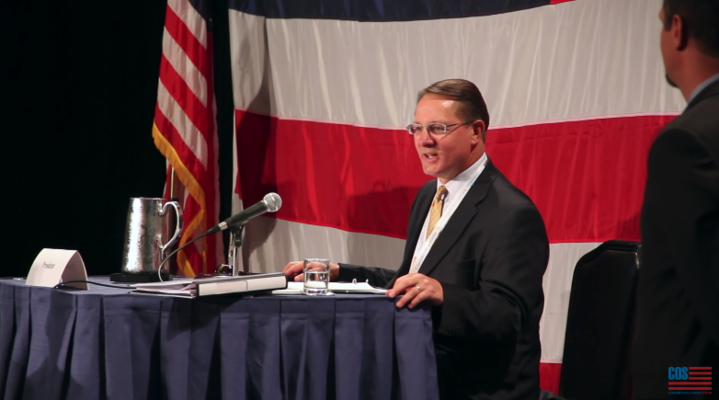 The Convention of States Project is pleased to announce the naming of Utah State Representative Ken Ivory as the Project’s first Senior Legislative Advisor.

In this role he will work to educate and mentor state legislators in the Article V process and train grassroots activists to work effectively with state legislators. Both legislative outreach and grassroots training will be crucial as the Convention of States Project seeks to secure the remaining 26 states to call an Article V Amendments Convention.

“Rep. Ivory is a rock-solid legislator focused on federalism and States rights—the perfect champion against a federal government that is broken and will never fix itself,” said Mark Meckler, President of Citizens for Self-Governance. “The time is NOW for the states to push back against the federal government and Ken is perfectly suited to educate and encourage his fellow legislators from around the country that the states must stand together against the federal beast.”

It was never intended that our liberty would rise or fall depending on who won a presidential election,” said Representative Ken Ivory (UT). “Constitutional boundaries are intended to secure the blessings of liberty for all of us, always. It is an honor to come on board as a senior legislative adviser with the Convention of States Project in working to restore the constitutional boundaries that protect people's right to prosper -- no matter who occupies the White House or the halls of Congress in the coming years or decades.”

Rep. Ivory was elected to the Utah House of Representatives in 2010. He is known throughout the United States for his expertise on federalism and the public lands issue in the West. Ken is the Federalism Chair of the American Legislative Exchange Council and seeks to make a positive difference in restoring the principles of freedom that our nation was founded upon.

More recently, Rep. Ivory was elected President of the first-ever Simulated Convention of States in Williamsburg, Va. He led these historic proceedings with grace and integrity, and the Convention successfully proposed a complete package of six amendments designed to limit the power and jurisdiction of the federal government, including repeal of the 16th Amendment and term limits. Rep. Ivory played an integral role in the Simulation’s smooth operation, which gave state legislators an invaluable opportunity to learn the Article V process first hand. Rep. Ivory will continue in this educational role in his position as Senior Legislative Advisor where his experience and strong leadership will be a vital asset for legislators in the 2017 legislative sessions that begin in January and beyond.

About the Convention of States Project: