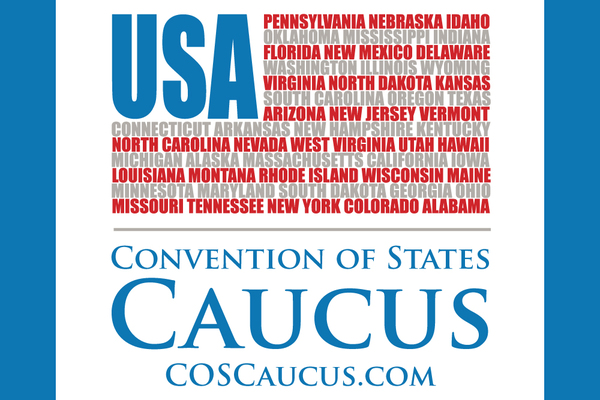 The Convention of States Project announces the launch of the Convention of States Caucus, a union of state legislators from around the country committed to stopping the runaway train in Washington, D.C., with an Article V Convention of States. The first order of business—and something that hasn’t been accomplished by other Article V groups, the COS Caucus will be discussing and finalizing a set of rules for a Convention of States, the first draft of which will be announced on Thursday, July 23rd, at an evening reception during the upcoming American Legislative Exchange Council (ALEC) meeting in San Diego, California.

State representatives interested in joining the fight against federal abuse by calling a Convention of States are welcome to attend all events.

Mark Meckler, President of Citizens for Self-Governance and co-founder of the Convention of States Project, said, “Not since the founding of our great nation have state representatives had an opportunity like this. A Convention of States allows them to follow the footsteps of Madison, Jefferson, and Mason as they fight to save our country from the continual, expanding, unconstitutional overreach of the federal government.”

The first draft of the proposed rules will be announced at the Thursday, July 23rd evening event, with discussion of them at the 9:45 am policy workshop on Friday, July 24, at the ALEC conference. Attendees will be given a copy of the rules, which will be discussed by four panelists already familiar with the text:

The Convention of States Project is currently organized in all 50 states, including hundreds of thousands of volunteers, supporters and advocates committed to stopping the federal government’s abuse of power. Alaska, Florida, Georgia, and Alabama have passed our Article V resolution since our beginning in 2013. This year alone we filed our resolution in 35 states. For more information visit www.ConventionofStates.com.