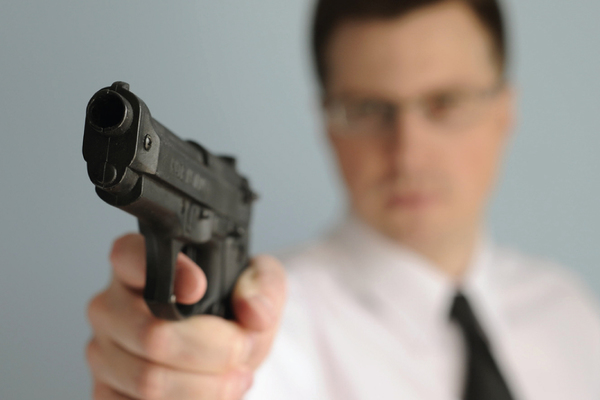 Former U.S. Senator Tom Coburn appeared on CNBC recently to address the arming of non-military government agencies like the IRS. Now the Washington Free Beacon has published more details on this issue, and the problem is even worse than we feared...

There are now more non-military government employees who carry guns than there are U.S. Marines, according to a new report.

Open the Books, a taxpayer watchdog group, released a study Wednesday that finds domestic government agencies continue to grow their stockpiles of military-style weapons, as Democrats sat on the House floor calling for more restrictions on what guns American citizens can buy.

The “Militarization of America” report found civilian agencies spent $1.48 billion on guns, ammunition, and military-style equipment between 2006 and 2014. Examples include IRS agents with AR-15s, and EPA bureaucrats wearing camouflage.

“Regulatory enforcement within administrative agencies now carries the might of military-style equipment and weapons,” Open the Books said. “For example, the Food and Drug Administration includes 183 armed ‘special agents,’ a 50 percent increase over the ten years from 1998-2008. At Health and Human Services (HHS), ‘Special Office of Inspector General Agents’ are now trained with sophisticated weaponry by the same contractors who train our military special forces troops.”

Open the Books found there are now over 200,000 non-military federal officers with arrest and firearm authority, surpassing the 182,100 personnel who are actively serving in the U.S. Marines Corps.

The IRS spent nearly $11 million on guns, ammunition, and military-style equipment for its 2,316 special agents. The tax collecting agency has billed taxpayers for pump-action and semi-automatic shotguns, semi-automatic Smith & Wesson M&P15s, and Heckler & Koch H&K 416 rifles, which can be loaded with 30-round magazines.

The EPA spent $3.1 million on guns, ammo, and equipment, including drones, night vision, “camouflage and other deceptive equipment,” and body armor.

Why do our government bureaucracies need armed agents? No one knows, and they’re not saying. But, as former U.S. Senator Tom Coburn explained, the needless arming of the IRS and other agencies represents a huge waste of taxpayer funds. With our nation over $19 trillion in debt, we must curtail our spending if we want our children and grandchildren to be financially secure.