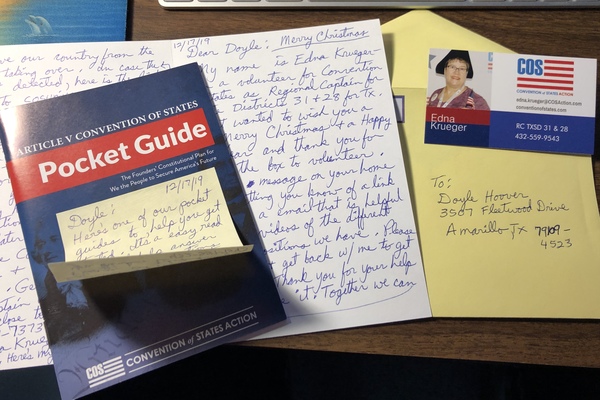 When was the last time you received a handwritten letter instead of an email or a text? Were you impressed that your correspondent took the time and effort to compose a note with a pen rather than their thumbs?

One of the most proactive and significant things a supporter of Convention of States can do is to directly contact legislators by writing a good old-fashioned letter.

As COS president Mark Meckler demonstrated during a gathering in Massachusetts in late 2019, handwritten expressions of support for COS to legislators are extremely effective. Personal letters from constituents and citizens turned one North Carolina state representative from an opponent of COS to a supporter.

Handwritten letters get attention. Legislative offices are bombarded with form emails and computer-generated petitions from interest groups, think tanks, and grassroots groups like COS each day. Such efforts have their place and should not be dismissed.

But the volume of such communication soon becomes white noise to legislators and their staffs. Personal handwritten letters addressed directly to your representatives and other significant legislators enhance the commitment and dedication of activists like you and spotlight the issue about which you are writing.

What to write? That’s up to you. Your letter will stand out precisely because it is yours. Whether you focus on a topic such as term limits or a balanced budget or explain your concern about the general overreach of the U.S. Congress that Article V and COS can and will address, make the letter your own.

In short, emphasize that which is important to you. The representative or senator to whom you are writing will recognize and appreciate your having taken the time to write and express yourself, even if that legislator disagrees or is unfamiliar with COS.

Legislators who receive a good deal of letters on a particular subject will be more inclined to reassess their views, or research the resolution and COS movement further and be more amenable to supporting it. As always, be polite and thank the legislator for their service and consideration.

Here are some tips for getting started:

Don’t be shy or timid, and don’t procrastinate -- the legislature may be voting soon! Write and send your letter and increase the chances that your state passes the resolution. As hockey legend Wayne Gretzky said: “One-hundred percent of the shots you don’t take don’t go in.”