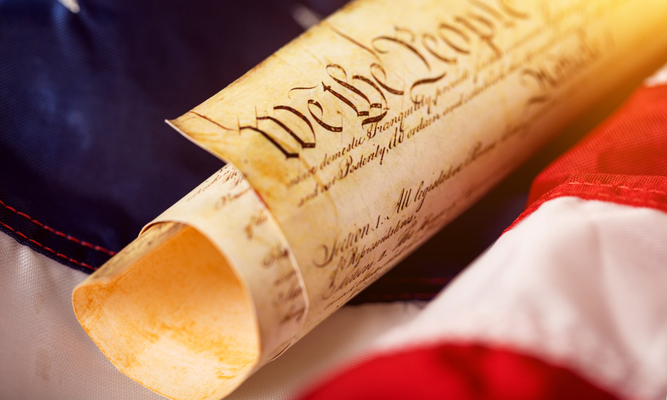 The United States Constitution has around 4500 words, but seems to be the most unreadable document in the nation.

A substantial number of long-standing arguments and disagreements could very easily be dispatched if one or more of the parties involved in such discussions were to take the time to simply read our framing document.

Today in America it is common for people on either side of an argument to shout down their counterpart with a claim of a constitutional right, or to say that the other person's ideas are unconstitutional. But how many people really have read and understand the United States Constitution?

I carry a pocket Constitution every day. It also includes the text of the Declaration. I read at least a part of it every single day. At times, in discussion, I will pull it from my pocket and ask the person declaring something I’m fairly certain not to be true to show me exactly where it is shown in the document.

Unsurprisingly, the mere appearance of the document is a complete shock. The person has no notion as to how they would go about finding what they believe to be the proof of their claim. To many, it seems, declaring constitutional protections for their arguments is tantamount to referencing a mythical deity and is unable to be questioned.

Our Constitution is a publicly available document which even a cursory internet search can produce the text. Yet the mention of it is like yelling “Beetlejuice” three times.

Recently, in one such instance, someone was rather heated in telling me that current threats to the American democracy were grave issues which needed to be taken seriously. I happened to agree but, I placed my beloved pocket Constitution upon the desk between myself and said individual and asked if they would kindly show me where in either of the documents contained therein I would find where American democracy was created or defined or outlined in any way.

Can you show me even where the word democracy appears in any of our founding documents? I inquired.

While I agreed with this person that there are existential threats to America which require serious attention, I thought it important to illustrate a mistaken notion about American government.

Each and every one of us should thank any and all deities in which we believe that the Founders saw fit to rebuke democracy with the revulsion with which that they did. We should all equally abhor pure democracy, despite what we have been taught our entire lives.

Pure democracy is nothing more than mob rule. Fifty-one percent of the electorate would determine any and all rules for the whole country.

With a bare majority of the votes, literally any person, or their property, is subject wholly to the whims of the majority. Imagine an angry mob in charge of everything and everyone in every capacity, including being able to repeal previous laws, safeguards, and rights.

In a republic, the individual has rights which the majority cannot infringe upon without due process. In the American republic, due process is protected from tyrannical control by the checks and balances established in that Constitution that nobody wants to read.

The Founders crafted the Constitution almost entirely on the premise that government is a necessary evil, that it is never benevolent, and it is a constant threat to American liberty.

Article V allows the people of the several states to rein in tyranny within our government in the form of additional amendments to that Constitution. The tyrants cannot stop it, and they are legally bound by the amendments that are ratified as equally as they are bound by any other part of the Constitution.

I urge you to read the Constitution, repeatedly. Read the Declaration, too. It certainly doesn’t hurt.

Most importantly, remember the ideals which bind us all as Americans. Those ideals are still present in those documents. We just need to dust them off a little.

Rather than a discussion about rewriting the Constitution, we should really just re-read it.