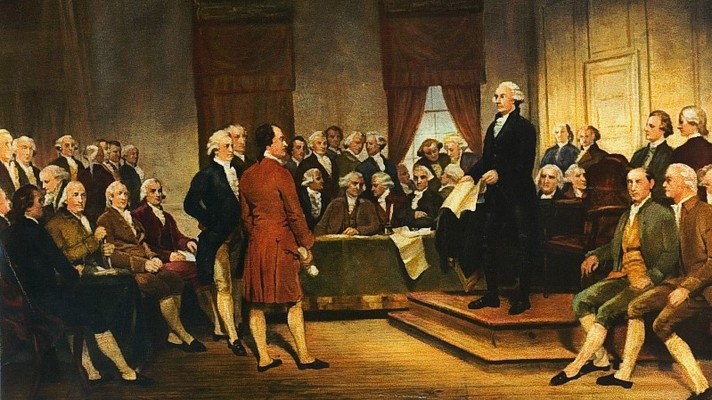 They found the institution [of slavery] existing among us, which they could not help; and they cast blame upon the British King for having permitted its introduction. Before the constitution, they prohibited its introduction into the north-western Territory---the only country we owned, then free from it. A the framing and adoption of the constitution, they forbore to so much as mention the word "slave" or "slavery" in the whole instrument.

One of the conceptions floating around in social media is the idea that those who framed the Constitution of the United States of America—hereafter, the Framers—were racist, or at least that the vast majority of them were racist.

Because the charge of racism is a severe denouncement, it is important to be meticulous in examining history to make sure that the charge is appropriate and justified. If not, then otherwise-innocent people may get caught up in a "blame game" where false accusations fly back and forth, clouding important issues by introducing unwarranted confusion.

With regard to proportional representation in the U.S. House of Representatives (as well as the apportionment of taxes), the U.S. Constitution—in Article I, Section 2—says that

Representatives and direct Taxes shall be apportioned among the several States which may be included within this Union, according to their respective Numbers, which shall be determined by adding to the whole Number of free Persons, including those bound to Service for a Term of Years, and excluding Indians not taxed, three fifths of all other Persons.

In determining a state’s "Numbers," there are three groups addressed in this quote which did not fall under the conception of "free Persons" but which still may possibly affect the apportionment of representation and taxation:

The first group indicates people who had agreed to a term of servitude in exchange for being brought to America by someone who had the resources to cover the high cost of their relocation to America from overseas. This group was to be counted among the "free Persons"—even though they may still be facing a common seven-year term of servitude.

The Native Americans, not being taxed or represented in the House of Representatives, were excluded.

The third group mentioned were the slaves of the slave states, which were found primarily in the South (e.g., Georgia, South Carolina), and this is the group important to the debate about racism.

Keep in mind that slaves themselves could not vote, so that by counting them, it merely increased the voting power of the slave-owners--by increasing their representation in the House of Representatives.

Because the free states could not condone giving away so much power to the slave states, a compromise was reached where three of every five slaves would be counted.

Critics who claim that the Framers were racist often seize on this "three-fifths" rule for apportioning representation as an indication that the Framers actually believed that slaves were only three-fifths of a person, or at least less than a whole person. But other details from the historical record prove that this is not the case.

Even the way the issue was worded in the Constitution—with the word "slaves" left out and replaced with "all other Persons"—indicates that the Framers did not want to grant any credence to the enterprise of slavery.

We have seen the mere distinction of colour made in the most enlightened period of time, a ground of the most oppressive dominion ever exercised by man over man. What has been the source of those unjust laws complained of among ourselves?

These are not the words of a racist. Madison, Father of the US Constitution, said that one’s skin color is a "mere distinction" and is therefore not grounds for any oppressive dominion, and finished by stating that laws enabling such a dominion are unjust.

Another line of evidence comes from the Constitution expressly granting Congress the power to prohibit the slave trade—though after an initial 20-year delay. The wording shows up in Article I, Section 9 where it states

The Migration or Importation of such Persons as any of the States now existing shall think proper to admit, shall not be prohibited by the Congress prior to the Year one thousand eight hundred and eight…

There had even been delegates arguing for granting Congress the power to prohibit the slave trade eight years sooner (by 1800). Here is the relevant entry [4], on 25 Aug 1787, from Madison’s notes of the Convention:

The Report of the Committee of eleven [see friday the 24th. instant] being taken up,

As you can see from the record of the proceedings, there had been a "Committee of eleven" which had proposed the prohibition on the importation of slaves by 1800, but then General Pinkney (SC) moved to have that date pushed back by eight years, and Mr. Ghorum "seconded" the motion.

While Pinkney was thinking about protecting his interests and those of his South Carolina constituents--many of whom owned plantations supported by the work of slaves--the fact that he agreed to granting Congress the power to prohibit the slave trade is evidence toward the strong anti-slavery stance of the other Framers.

His constituents may not have been happy that he agreed to it, but when facing the strong anti-slavery movement (from most of the Framers of the Constitution), he had no other choice.

When the evidence is examined closely, it is revealed that the Framers were not racists, at least not when viewed in the majority. The majority of them were against slavery, and they even took actions to limit slavery in the United States of America.

One can argue that postponing the prohibition of the slave trade is something which would be viewed negatively in contemporary times, but in that time when the U.S. was founded—when many large and small fortunes and estates were dependent on slavery—it was a bold move and definitely a step in the right direction.

The wording in our founding documents definitely helped to plant the seed and lay the foundation for a time when slavery could become a thing of the past.

This is because most of our Framers were so against slavery that it was a deal-breaker for them, and they were willing to risk the unity of the Union (between North and South) in persistently pressing for it's removal.