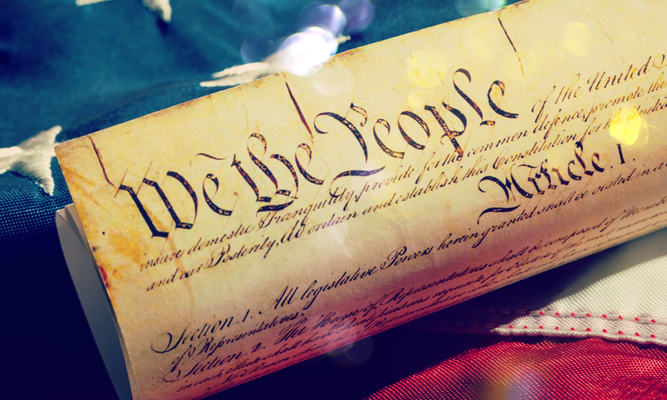 You've been waiting, and it's finally here!

The Library of Congress just released 2020's additions to the U.S. Constitution (courtesy of the Supreme Court) and you can purchase your own copy for the low, low price of $30.

The 3.125-pound tome adds to the giant 3000-page book outlining all the ways the Supreme Court has misinterpreted our founding document over the years to give more power to themselves and the rest of the federal government.

Of course, none of these amendments to the Constitution were subjected to the process outlined in Article V. No, they were instituted almost unilaterally by nine lawyers in black robes who are all much, much smarter than we are. These men and women know best, and now We the People have the privilege to know what the Constitution really means.

Where would our country be without this judicial overreach? We'd have a small federal government with limited, enumerated powers. There would be no bureaucratic state, no Deep State, and no Swamp. We the People would have the freedom to decide for ourselves how to live our lives, and we'd be able to hold the most powerful elected officials (our state representatives) accountable.

Fortunately, over the last 100 years, the Supreme Court has saved us from this terrible fate. They've "interpreted" the Constitution to give the federal government near-unlimited power, and everyday Americans don't have to worry about tricky things like "freedom" and "self-governance."

That's probably why you were so excited to get your hands on this year's "Constitution of the United States of America Analysis and Interpretation." You've been dying to see how the Supreme Court will add unilateral amendments to our founding document, and you couldn't wait to insert this year's addendum into what has become, effectively, a 3000-page Constitution:

You might not be interested in this, but there is a way to eliminate those 3000 pages and get our country back to the Founders' original vision. An Article V Convention of States is called and controlled by the states and has the power to propose its own constitutional amendments. These amendments must be ratified by 38 states after the Convention, but they can eliminate the last 100 years of judicial activism and return decision-making power to the states and the people.