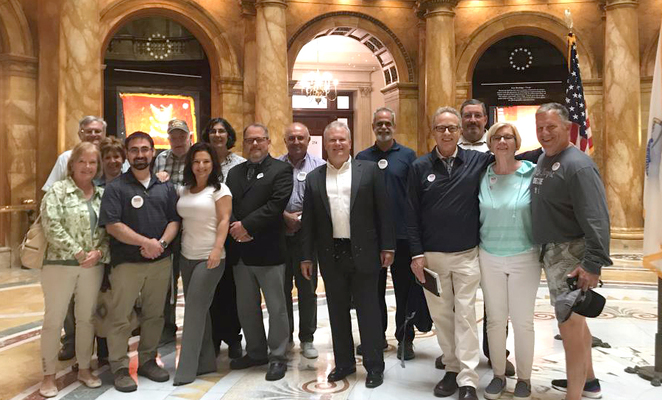 Happy New Year to all and best wishes for your 2020.

Somehow, we have made it through another holiday season and are looking toward 2020 with hopes and ambitions. Aside from technicalities, a new year isn’t really different from its predecessor. Time is a construct of humans to measure the immeasurable.

Within that immeasurable space, however, we can move forward as united citizens and push for the same changes we were pushing for in 2019. We want to rein in the out-of-control federal government via amendments to our glorious Constitution of the United States. We accomplish said amendments via an Article V Convention of States.

So I find myself exactly where I was last year, which is inviting you to spread awareness and cultivate desire for a convention amongst the people of Massachusetts, so that We the People can re-establish our voice in government.

With the hopes of fresh new everything in 2020, we find ourselves staring at the same issues. But there is hope. The law-abiding, church-going citizens in Texas have shown the nation that the proper use of a tool can check the damage done by the abuse of said tool.

A Convention of States to propose amendments will remove the shadow of the Washington, D.C., elitists from the process, and the true will of American citizens will shine through.

Just as we dread seeing our Visa bills in January (our burden of generosity during the holidays), we can limit the spending of the federal government with an amendment requiring the balancing of budgets and the paying down of our mind-boggling $23 trillion national debt.

We can stop politicians from allowing corporations to buy their way on to easy street in the form of term limits for Congress. Regarding the 22nd amendment, it has been said that “too much power in the hands of one person for too long must surely corrupt.” That should certainly apply to Congressional offices equally, as it does the offices of President and Vice President.

It's a new year, but we face the same troubles. However, if we start working today, when 2021 appears we can proudly proclaim that a new year solved those troubles.

Can you imagine the sated feeling looking back on 2020 and seeing how we all came together and solved this? I know that I can. And I know that I want it to be real. When 2021 greets me in the window, I want to smile at it and say, “Welcome, New Year. We don’t have those same 2020 problems anymore.”

So let’s get started, shall we? Find resources and other ways to contribute locally. I can’t wait to meet you out there!