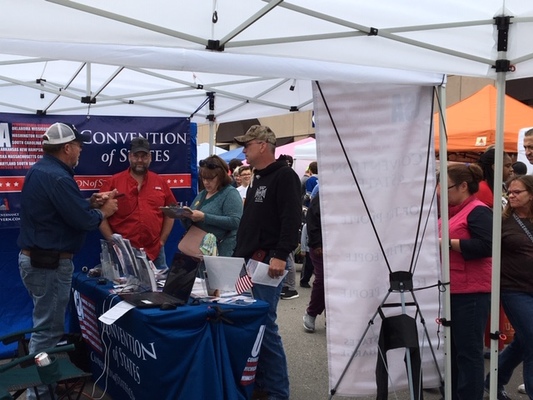 For more than 70 years Missouri’s Liberty Fall Festival has drawn patriots from in and around the Kansas City area. But this September, the crowds were different.

“People are simply fed up with what they see going on in Washington, D.C., and want to do something to change it. That 'something’ is signing the COS petition, getting involved, and helping us get back to the basics of self-governance by holding an Article V amendments convention.”

Hite met a train of people waiting at the Convention of States Missouri information booth when he returned from the festival’s opening parade along Liberty’s historic main street.

“There were patriots from Wisconsin, Michigan and even Washington, D.C.,” he says. “The interaction with attendees was the best I’ve ever experienced.”

Overall, the results were outstanding: 52 COS petition signers, five committed volunteers, and approximately 450 visitors who came to learn more about the Convention of States grassroots movement.

The only thing missing was additional volunteers to help Hite man the COS booth and answer questions. Interested in helping out next year? Contact Barney Hite at barney.hite@cosaction.com.