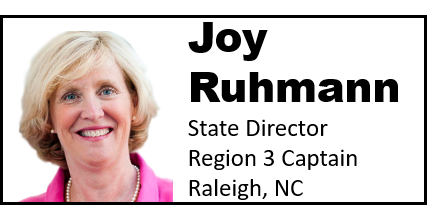 Joy is a native North Carolinian. She was born and raised in Pitt County moving as a teenager with her family to Raleigh in 1973 where she’s lived most of her adult life.

Joy learned about the Convention of States movement in the summer of 2018. After learning all that she could about the work of COS across the country, she immediately applied to serve as District Captain in House District 49, moving into the role of Regional Captain about 6 months later. She assumed her current role as State Director on March 17, 2020.

The focus of the COS Leadership team is to recruit, educate and activate a grassroots army to drain the swamp in DC, restore sovereignty to the great state of North Carolina, and pass the freedoms they've enjoyed throughout their life for her children and grandchildren.

In her day job, Joy is President of Level Up Leadership, Inc., a Raleigh based management consulting firm. She is passionate about supporting leaders and their teams in creating better results through better hires, better communication and better leadership.

John was born and raised in Dixon, IL – hometown of former President Ronald Reagan. John and his wife Sharon have been married for 47 years (high school sweethearts) and have a son and a daughter, both married and have four grand daughters and one grandson.

They moved to Raleigh in 2007 to follow their first grandchild to the great state of NC. John became an Environmental, Health and Safety (EHS) Consultant to Duke Energy providing support to manage contractors, building new energy facilities; ensuring that they met and fulfilled all contract and state requirements regarding the environment and safety of the construction workers.

John retired in April of 2019 following 48 years of gainful employment. John became involved in COS in October of 2019 after hearing about an organization and a movement to make improvements to our federal government. Specifically; limit the size and scope of the federal government, fiscal responsibility, and term limits. John’s DC and RC played a critical role in his decision to step up and volunteer for the State Information Analyst position.

John was interested in learning about how the logistics and data surrounding the COS organization can help to grow the grassroots army and influence legislators; now, for a passing of the resolution, and tomorrow, as the convention is called and amendments are proposed.

Aryn graduated from Miami University (of OH) with a BS in Chemistry and worked at Cincinnati Children's Hospital Research Foundation for 10 years before moving south to High Point.

She traded in her lab coat for a pitchfork and a John Deere tractor when her family bought 30 acres to live out their dream of owning a horse farm. Steep learning curves and several broken implements later, they are a fully functioning boarding and riding lesson facility.

Aryn stumbled upon COS shortly before the 2016 presidential election. Perusing Facebook, a COS message caught her eye, reading in disbelief that an organization existed using the Constitution to fix the Constitution. Finding other patriots has been a life changer for Aryn.

Aryn started as a district captain and later a regional captain; in the last few weeks she was asked to take her current role. Her hope is to engage all the frustrated North Carolinian's, asking them to join us in the fight to save our Republic.

Forrest was born in Charlotte and raised in Denver, NC. He is married and has two grown children, one currently serving in the Air Force, the other in Nursing school. Forrest and his wife Lindsay also have 3 rescue mutts, 1 grumpy old cat, chickens, and a ¼ acre homestead in Mt. Airy NC.

He joined the Navy in 1991, and served in the Gulf War. It was during that time that he began to see that our government’s overreach was too broad needed to be reined in. He spent the next 20+ years as a self-employed aircraft mechanic traveling the world.As an aircraft mechanic he studied LEAN operations and realized how much of the tax payers money the government was wasting.

In 2015 he retired from aviation and is currently a General Manager for Factory Motor Parts. Throughout his life he has worked with various veteran and constitutional groups such as Project Appleseed. In his spare time, Forrest is an avid old-style wood worker, leathercrafter, knife maker, gardener, and Permaculture designer. 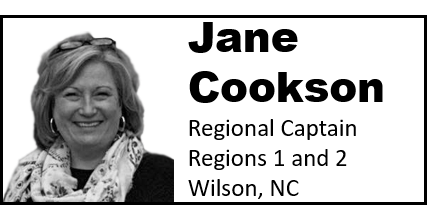 Jane was born and raised in West Virginia, Jane has been married for 44 years to Frank, is the mother of three grown sons, and the grandmother of six. Jane has been with BB&T (now Truist) for 28 years and filled a variety of positions including training and quality manager. Prior to moving to NC in 1991, Jane was an assistant professor of business at West Virginia University-Parkersburg.

Jane serves on the Executive Board of the Wilson County Republican Party, is a precinct chairperson, and, when time permits, coordinates costumes for local theater productions.

Over the years, she became increasingly alarmed by the blatant overreach and irresponsibility demonstrated by federal officials, bureaucratic invasion into every aspect of our lives, and activist judges who undermine the rule of law. She was concerned for the future of her grandchildren, but there seemed to be no answer or way to fight back. Jane stumbled onto Convention of States in 2016 after reading an article in “The Daily Rant” by Mychal Massie. She researched the movement for several months and became convinced that COS is the only way to constitutionally “secure the blessings of liberty for ourselves and our posterity.” 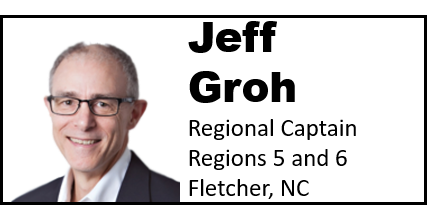 Jeff Groh lives in Fletcher, NC. He started as a District Captain in NC HD113 in the spring of 2017, after learning about COS from Mark Levin. His journey to COS started with the passage of Obama Care and then watching Republicans do nothing after the 2010 mid-term elections.

He became convinced, like many of us, that both parties were to blame for the growth of the federal government and COS was the only way to solve the problem.

Jeff owns two small companies, one manufactures specialty products for the poultry industry, and the other involves sales, sales management and business development for a small analytical instrument manufacturer. He enjoys cooking, reading, writing and running. He has a 28-year-old married daughter in Greenville, SC who is the real reason he is involved with COS.

John was born and raised in Farmington, Missouri. After high school he wanted to do more for his country and set off to join the army. After his first enlistment, John chose to leave the military. While settling into life in Missouri, September 11th happened. Soon after, he reenlisted and was assigned to Ft. Bragg and truly found a home in NC. He was medically retired on July 4, 2007 and has lived in the state ever since with his wife and their children.

John attended Sandhills Community College in Pinehurst and the University of North Carolina in Chapel Hill and graduated in 2016 with a BS in Biomedical Engineering. He is currently working at a medical manufacturing facility in the Raleigh area as a Process/Manufacturing Engineer.

John stumbled across the Article V statute in the US Constitution while writing a term paper. Soon after he found the Convention of States project. He immediately signed the petition and wanted to volunteer but was focused on his education and employment. With a lot of encouragement and conversations with COS volunteers John became District Captain.

John was recently asked to take the lead as State Communications Coordinator. This is nothing new for John. During high school, he took a lead role in setting up a HS television station, directed live sporting and civic events, built stages and backdrops, and spent many hours behind a camera. He assisted with Public Relations in Afghanistan, Italy, and Ft. Bragg. John will focus on growing the grassroots by engaging visitors and volunteers on social media and at events throughout the state.